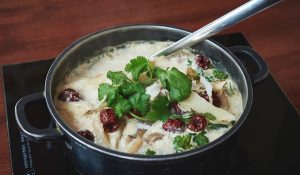 Our Rating: - no reviews for Little Four Seasons yet - Add your review

Despite being baby brother to next door’s Four Seasons, Little Four Seasons is certainly not small on taste. Hot Pots are the order of the day here – giant cauldrons to share, brimming with flavour, spice and all things nice. Their hat-trick of signature Hot Pots include Spicy Chicken, Pork Belly, and Chicken with Black Pepper, plus Spicy and Sour Fish.

Each table at Little Four Seasons comes with a built-in hotplate to keep your dishes bubbling away nicely. And, with the main attraction sorted, there are plenty of options for smaller top-ups to keep the Hot Pot party going.

If a Hot Pot just isn’t your thing, Little Four Seasons showcase plenty of other dishes to tantalise the taste buds. Like their Portuguese Style Chicken Bean Sauce, housed in a mountain of pillow-soft bread, or their fragrant Whole Steamed Sea Bass with Ginger and Spring Onion – or, if you’re up for a culinary challenge, a humungous Whole Crab with Chilli Sauce.

Opened in 2014, Little Four Seasons is the newest addition to the Four Seasons family. Since the founder, Hong-Kong-born Mr Lam, started the first Bayswater branch in 1990, their much-loved presence has continued to blossom across Chinatown and internationally.

Your Review For Little Four Seasons

Register with us to add your review for Little Four Seasons.