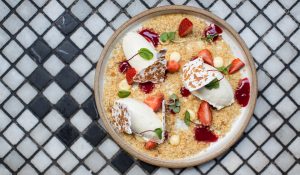 Our Rating: - no reviews for The Palomar yet - Add your review

One of Jerusalem’s finest exports, The Palomar, comes with an unrivalled reputation for exquisite contemporary Israeli cuisine.

Head chef Tomer Amedi grew up in Jerusalem. He was a guitarist, but his love for cooking grew as he learned more from his childhood friend and one of the three guys behind wildly successful (and award-winning) Jerusalem restaurant Machneyuda, chef Uri Navon.

After a successful stint in Israeli restaurants himself, Amedi opened the painfully cool Palomar in 2014 and, come 2015, it had already collected a mantelpiece worth of gongs from prestigious foodie publications.

Amedi designs the dishes carefully, elevating the sophistication factor for the discerning eyes and taste buds of his diners. And, if you want to dine with a piece of theatrical action, pull up a stool at their long zinc bar overlooking the chefs as they whizz up culinary wonders.

Your Review For The Palomar

Register with us to add your review for The Palomar.