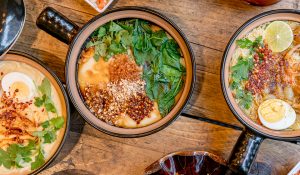 Our Rating: - no reviews for The ShanState yet - Add your review

Jump on board the Burmese bandwagon and discover one of this year’s hottest foodie trends at The Shan State on Shaftesbury Avenue. Best for: Dumplings, Noodles, Hotpot, Spicy food

A province of Myanmar (formerly Burma), the Shan State borders Thailand, China and Laos so its deliciously diverse cuisine draws inspiration from a myriad of countries. It’s also from where Chinatown’s first ever Burmese restaurant takes its name. Occupying the former space of Mont Ruby Tea on Shaftesbury Avenue, The Shan State serves up colourful, authentic Burmese dishes, and – retaining their predecessors drinks, desserts and snack menu – bountiful bubble teas and sweet treats.

The addition of ten traditional Burmese dishes is where it gets exciting though; think, Laphet – pickled tea leaf salad. Yes, you read that right, tea that’s eaten and not drunk!  Pretty much a national delicacy, it’s served up with tomatoes, garlic, peanuts and dried prawns, the idea is to mix and match combo mouthfuls. After fermentation, the tea has a bittersweet flavour. Fun fact: in ancient times laphet was used as a peace offering between warring kingdoms.

Other Burmese delights at The Shan State include monk noodle soup; hot, sour and wonderfully warming. For something sweet to finish opt for grass jelly or rice dumplings.

With communal timber benches and booths, painterly umbrellas hanging from the ceiling and the walls a vivid Burmese jade green, The Shan State has a chic, contemporary ambience with a distinctly Western injection. Popular with a youthful clientele it’s the perfect spot for a fun catch up with friends to discover new flavours.

Your Review For The ShanState

Register with us to add your review for The ShanState.